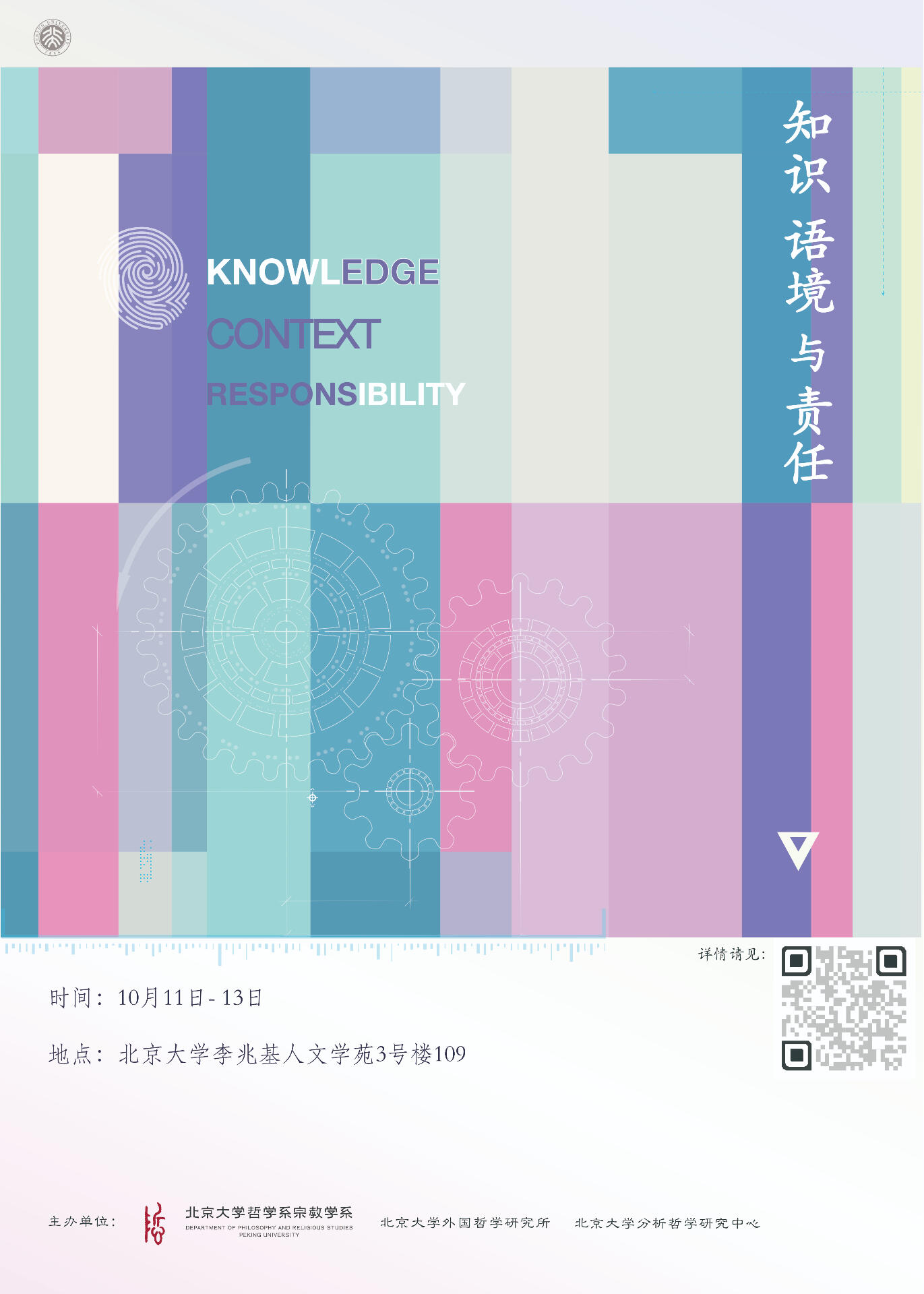 Abstract: Standard epistemic logic studies the inference patterns regarding propositional knowledge expressed by “knowing that”. However, knowledge is also expressed in natural language by “knowing how”, “knowing why”, “knowing what”, and so on. The “knowing how” expressions are in particular interesting for not only philosophers but also linguists and AI researchers. In this talk, I survey the recent developments of the logic of knowing how inspired by discussions in epistemology and automated planning in AI. We propose various semantics of the “knowing how” operator based on various notions of planning, and then unify them in a very general framework. For each of them, we show a complete axiomatization of the logic and its decidability. We conclude with further directions.

Abstract: It has been alleged that the demands of friendship conflict with the norms of epistemology—in particular, that there are cases in which the moral demands of friendship would require one to give a friend the benefit of the doubt, and thereby come to believe something in violation of ordinary epistemic standards on justified or responsible belief. The burden of this paper is to explain these appearances away. I contend that the impression of epistemic partiality in friendship dissipates once we acknowledge the sorts of practical and epistemic reasons that are generated by our values: value-reflecting reasons. The present proposal has several virtues: it requires fewer substantial commitments than other proposals seeking to resist the case for epistemic partiality (in particular, it eschews both Pragmatic Encroachment and Epistemic Permissivism); it is independently motivated, as it cites a phenomenon—value-reflecting reasons—we have independent reasons to accept; it provides a single, unified account of how various features of friendship bear on belief-formation; and makes clear how it is the very value we place on friendship itself that ensures against epistemic partiality.

Abstract: In this talk I will defend a version of pluralistic relativism. In the first part of this talk I will present my view of a functional morality by appealing to the moral diverse traditions in China. Confucianism, Daoism and Chinese Buddhism have influenced traditional Chinese moral practices. In China each of these three philosophical, moral and religious traditions is conceived as conceptually consistent and practically sufficient to guide those who endorse them. If each is indeed conceptually consistent and practically sufficient, then it seems to me that each is a functional morality. In the second part I explain the connection between moral plurality and the perception of moral ambivalence that our own moral beliefs might not be true. In the third part I argue that radical moral relativism and weak universalism cannot accommodate moral plurality and moral ambivalence. In the fourth part I explain why pluralistic relativism can best accommodate moral plurality and moral ambivalence. In the last part I present how pluralistic relativism helps us to deal with disagreement and motivates us to respect those who are different from us.

Abstract: Contextualist treatments of clashes of intuitions can allow that two claims, apparently in conflict, can both be true. But making true utterances is far from the only thing that matters — there are often substantive normative questions about what contextual parameters are appropriate to a given conversational situation. This paper foregrounds the importance of the social power to set contextual standards, and how it relates to injustice and oppression, introducing a phenomenon I call “contextual injustice,” which has to do with the unjust manipulation of conversational parameters in context-sensitive discourse. My central example applies contextualism about knowledge ascriptions to questions about knowledge regarding sexual assault allegations. The central upshot is that the connections between language, epistemology, and social justice are very deeply interlinked.

Abstract: Potential perspectivism is the view that what an agent ought to do (believe, like, fear…) depends primarily on facts that are potentially available to her. I consider a possible challenge to this view. The problem stems from the fact that potentially accessible facts do not always agglomerate over conjunction. This implies that one can fail to have relevant access to a set of facts as a whole, but have access to proper subsets of it each of which can support different incompatible responses (actions, attitudes or omissions). I argue that potential perspectivism has no unproblematic answer to the question what the agent ought to do (believe, like, fear…) in such circumstances. I consider several possible responses and argue that they are all unsatisfactory, either because incompatible with central perspectivist assumptions or because independently implausible.

Abstract: I present in this talk a version of perspectivalism for knowledge, according to which the utterer’s perspective neither factors into the semantic content, nor factors into the content’s postsemantic truth-assessment, but rather functions as metasemantic stipulation of what set of points of evaluation should be adopted in the conversation. I explain how the proposed stipulative view can meet our predicted perception of disagreement in conversations with explicit or implicit epistemic modals. I will briefly discuss the stipulative view’s significance both in epistemology and in the theory of meaning.